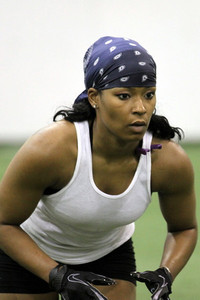 Erin Alyssa Stewart recently tried out for the Lingerie Football League's Baltimore Charm and made such an immediate impression on head coach Rick Reeder that he offered her a spot on the roster that same day. Stewart has a passion and toughness that cannot be coached and once she picks up the team's comprehensive playbook, will make an immediate impact in the trenches, where she is expected to play.
I asked Baltimore Charm head coach Rick Reeder what he saw from Erin the moment she stepped out onto the arena football field for her initial tryout.

"For not knowing football when she tried out in June - she had great form, hands, feet, explosive, strong - she is an athlete that will make an impact for this team and in this league - plus, when I first saw her at tryouts she always had a positive attitude - that is one of the big things that I look for in a player."

Erin comes from a long military background, which started with her father, continued with her siblings and naturally led to her educational and vocational decisions about her future.

"My father was in the Army, my eldest brother was in the US Navy, my second oldest brother and Step-Dad are Former Marines, and my sister is in the Army Reserves. I attended a military High School (Chicago Military Academy- Bronzeville) for four years. Subsequently, I obtained my Bachelors Degree in Criminal Justice, then my Masters Degree in Law Enforcement and Justice Administration at 24 years of age. But I realized, at the time, I was not ready for a 9am-5pm job. So I joined the US Military, right after I graduated, to travel the world, experience new adventures, and follow in the footsteps of my siblings and father. I’ve been in the military for almost 3 years so far and I love it!!! I would love to see more Soldiers in the LFL stadiums! Many of the military members have the wrong impression of LFL. It’s ACTUAL AMERICAN FOOTBALL! I would like them to realize that it’s not just sexy girls prancing around in lingerie. These girls hit and they hit hard!!!!" 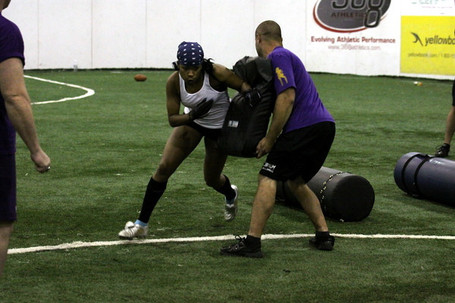 (Photo Credit: David Marston of Marston24 Photography)
1. What is your prior athletic background?

"My prior athletic background consisted of High School and College Soccer, Basketball, Volleyball and Track. I also used to Box growing up at local YMCAs and sports facilities. However, I’ve never played Football."

2. How did you hear about the Charm tryouts?

"When I lived in Chicago, IL I saw a few advertisements for the Chicago Bliss. Then, I got stationed in Virginia. I was still interested in playing, so I did some research and saw that the closest team was Baltimore. I messaged Coach Reeder and Coach Morrison on Facebook, and they informed me about the upcoming tryouts; which was literally two days away from my original message to the coaches."

3. What made you think you could play tackle football on this level?

"I never really knew if I could play tackle football, but I love being aggressive and hitting due to my Boxing background. Plus, I figured if I can hit someone and not go to jail…why not try it out!! Hahahaha"

5. What image do you want to portray to make people understand this is not "powder-puff" football?

"I would like people to know that these women in the LFL go hard in the gym; they give their blood, sweat and tears at practice, on and off the field. This isn’t tag football, nor is it flag. We are aggressive, fierce and hungry to play. We just happen to look good doing it. From turf burns to pulled muscles, the hits are real and we have the scars and bruises to prove it."

6. What do you think about the uniforms you will be required to wear?

"Ummmm hahaha good question! Most women wear less than what we are required to wear on the beach, so why should we be frowned upon for wearing it on the field? Gorgeous women in bikinis playing an American sport. What honest man or woman wouldn’t want to see that? I don’t feel that I’m being exploited; I chose to play. However, because some of us hit harder than some of the males in the NFL, we should have the necessary padding to protect us like that of the NFL. "

7. How have the veteran players welcomed you?

"The veterans have welcomed me with open arms. They continue to give me great advice to make me better; I’m all for constructive criticism. I’ve yet to see any real "BITCH-ASSNESS" on the team."

8. What is the toughest part of the game for you to grasp?

"The toughest part of the game for me is memorizing the plays. This year Coach wants to implement some really tough plays. A few are plays that NFL players run. I’m up for the challenge though."

9. What drives you to commit to the team, the time and effort involved for practice, training, etc.?

"I love sports and I’m very competitive!!!! Simple as that. I work hard at everything I do, because there is always someone out there trying to take your spot. Not to mention, when I join a team, they become my family. I don’t want to let my family down. On and off the field, we have to rely on each other to complete a play or get a job done. If I give 110% on and off the field, I’m sure I will gain their respect, loyalty and friendship. With those values instilled, we should be able to win more games this season."

"At the present time, I’m a mentor to a few High School Females back at home in Chicago. I love to work out in the morning before work (cardio) and right after work (weightlifting). I love to Dance, Bowl, Skate, Listen to Music and watch Movies. I’m the youngest of Five siblings (I have a twin sister, and three brothers (two of which are twins as well lol). My mother was an athlete and my brothers are athletes as well. Two of my brothers played Football in college-one a Tight End and the other a Cornerback. They give me advice when I ask them. I have no dependents and my fiancé is overseas in Iraq."

Posted by LexiLFLMe at 9:56 PM 4 comments

Jim Wallin is the Managing Director of LFL360.com as well as LFL Films' Supervising Producer. He is a multi-faceted mass communications professional who produces news, sports and entertainment content across a variety of mediums. Previous to his tenure with the LFL, Jim worked for the FOX News Channel in New York, including its top-rated "The O'Reilly Factor" program as well as with several media properties in the Chicago market. He is a die-hard Chicago Cubs fan who continues to hold out infinite hope for a World Series Title at least once in his lifetime. (Twitter: @whitebalanced)
Posted by LexiLFLMe at 10:51 AM 2 comments

SEASON KICK OFF in GREEN BAY